The stepwise monte carlo code is intended to give three-dimensional de novo models of RNA and protein motifs, with the prospect of reaching high accuracy. It differs from fragment assembly approaches in not relying on the database of known structures, and therefore is appropriate for problems that need to be modeled 'ab initio'.

Stepwise monte carlo is slower than fragment-based approaches, but appears comparable in speed to KIC-based loop modeling, and is much faster and easier to run than the original stepwise enumeration methods. The code has been written in a modular fashion so as to allow its testing to new problems by Rosetta developers, including non-natural backbones, cyclic peptides/nucleotides, disulfide-bonded proteins, and ligand docking.

A useful 20-minute description of the basis and conceptual framework of stepwise monte carlo is available here: 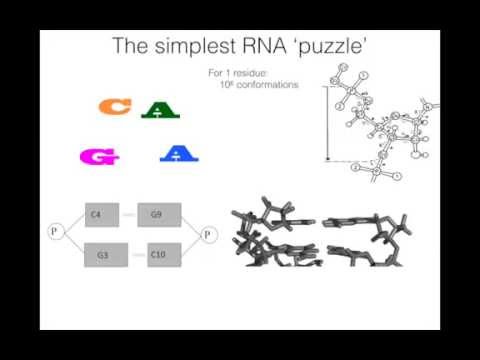 This monte carlo minimization method builds up models by moves that involve sampling and minimization of single residues, what we've previously termed a 'stepwise ansatz'. Unlike other modes of Rosetta, moves include the deletion and addition of single residues. Because these moves are concentrated at termini, they are accepted frequently and allow deep optimization of an all-atom energy function. For some problems, poses can also be split and merged, and separate chains can be docked or undocked. This same stepwise framework and application also reimplements enumerative sampling, following a recursion relation described previously (the 'stepwise assembly' method); in future releases, the older code will be removed.

A full accounting of options you may want to use is also available.

The central code for the stepwise application is in src/apps/public/stepwise/stepwise.cc with all important classes in src/protocols/stepwise .

Links to movies below illustrate these demos.

Stepwise Monte Carlo is unpublished at the time of writing – this documentation is intended to allow developers to test and expand the protocol while the Das lab is completing final benchmarks for RNA motifs. However, the method is an expansion of stepwise assembly, which has been described in previous references:

A paper describing Stepwise Monte Carlo's application to a blind prediction of the Zika xrRNA (RNA-Puzzle 18) and several tetraloop-tetraloop receptor interactions, as well as its performance in an extensive 82-motif benchmark, is available at biorxiv.

You typically will be using two input files:

Basic use for structure prediction

A sample command line is the following:

This assumes that you've set up 1zih.fasta to match, in sequence and numbering, residues 3-10 of 1zih.pdb:

Such a fasta would demand a starting PDB numbered A:3-4 A:9-10 that contains a gc/gc A-form helix.

The code takes about 3 minutes to generate one model, using 50 cycles of stepwise monte carlo. Running more cycles (up to 500) essentially guarantees the solution of this problem, even on a single laptop.

Here's an animation that reaches the known experimental structure. 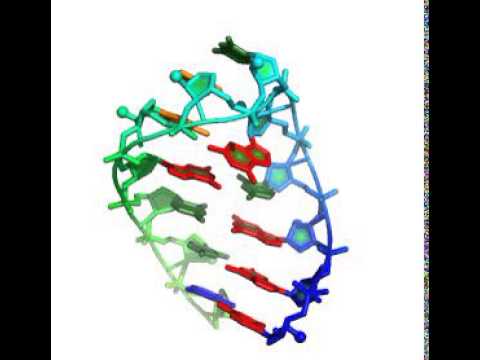 The flag -motif_mode is equivalent to -extra_min_res 4 9 -terminal_res 1 12 would ask for the closing base pair of the starting helix to be minimized (but not subject to additions, deletions, or rotamer resampling) during the run, and prevention of residues from stacking on the exterior boundary pair ('terminal res'). It is not obligatory, but allowing relaxation of closing base pairs appears to generally improve convergence in this and other RNA cases.

For RNA cases, -score:rna_torsion_potential RNA11_based_new -chemical::enlarge_H_lj are currently in use to test an updated RNA torsional potential and to help prevent overcompression of RNA helices. These are now turned on by default at the time of publication of the method, after completion of benchmarking.

Design is accomplished simply by specifying n ('unknown nucleotide') in the fasta file instead of a specific sequence at any positions that should be varied.

In contrast to the structure prediction example above, the supplied fasta file includes n to represent unknown nucleotides (an IUPAC standard), but is otherwise identical:

This design strategy generalizes: IUPAC supports ambiguous nucleic acid single letter codes that have been incorporated into Rosetta, as well. Beyond n, Rosetta also supports b, d, h, and v (for 'not a', 'not c', 'not g', and 'not t/u'); r and y (for purines g/a and pyrimidines u/c); w and s (for weak base pairers a/u and strong base pairers g/c); k and m (for keto bases g/u and amine bases a/c).

Note the specification of additional cycles (500 instead of 50). This is necessary to ensure closed, convergent solutions, as the search conformation space is larger in design cases than pure structure prediction cases. 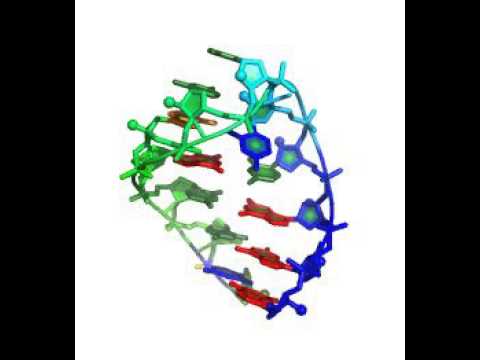 If you have an internal loop motif for an RNA, e.g, two strands connecting two helices, there are two ways to setup the problem.

If you do not know the relative rigid body orientations of the two end helices (this is the typical use case), specify those two chunks in different PDB files.

The starting helices in this case came from the rna_helix application, which is briefly described here. The other new flag here is -terminal_res, which disallows stacking on those residues (its not really necessary here but prevents some silly moves). You'll see nucleotides being added to both helix starts, and eventually merging of the two 'sides' of the problem, as in this movie: 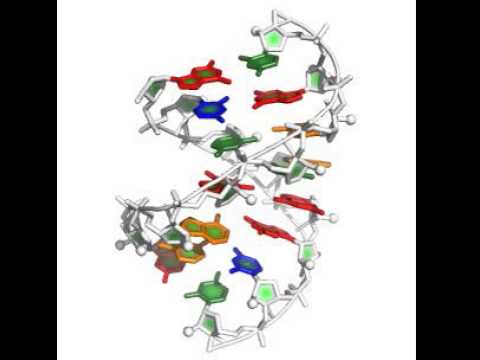 If you do have coordinates for the two end helices (this may happen in loop refinement problems, incl. RNA crystallographic refinement), specify those two chunks in the same PDB file:

Protein loops can be handled in a similar way to above RNA cases. [Under the hood, they are treated the same way as RNA.]

An example command line for rebuilding a loop from a starting structure with that loop excised:

Note that most loop modeling problems can be accelerated by cutting out a small 'sub-problem'; this was carried out by hand in the example above, but probably could be set up to happen automatically in Rosetta. Notes on additional flags: -from_scratch_frequency 0.0 -allow_split_off false turn off sampling of dipeptides that can be modeled free and merged into the loop; they are not so useful here, although they don't hurt. Last, not much work has been carried out on the energy function. The protein_res_level_energy.wts weights is an adaptation of score12.wts, as was carried out in this paper.

Input files & demo are in: 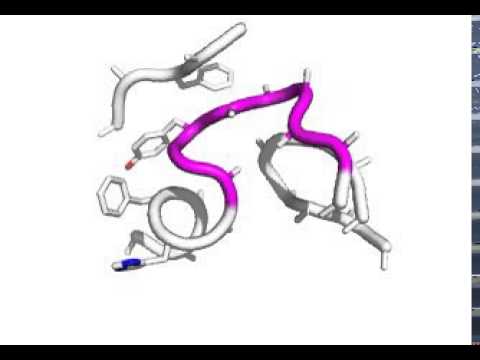 One interesting thing to note is that the packing of protein side-chains in stepwise monte carlo uses the new allow_virtual_side_chains setting and a score term free_side_chain that gives a bonus to residues for being virtualized (equal to 0.5 kcal times the number of side-chain torsions). This means that the side-chains only get instantiated if they can pack or form hydrogen bonds, and the results is a rather smoother conformational search.

For both RNA and proteins stepwise monte carlo can also build models 'from scratch' (this feature will be optimized in the future so that you won't have to build, e.g., RNA helices). An example command line is:

Here's an animation of a trajectory that achieves a low energy structure:

Most of the simulation may be spent flickering bits of secondary structure – in the future, we will probably setup some precomputation of these bits so that computation can be focused on build up of the complete mini-protein structure.

Input files & demo are in: rosetta/demos/public/stepwise_monte_carlo_mini_protein

What if all the residues are not rebuilt?

If the runs are returning many incomplete and different solutions, increase the number of cycles. If the run returns the same solution over and over again with say, a missing U, stepwise monte carlo is telling you that it thinks that the entropic cost of structuring that nucleotide is not compensated by packing/hydrogen-bonding interactions in any available structural solutions. There are ways to force that bulge to get built (see below) through post-processing.

It is possible to run single specified moves given a starting structure, specified through -move. This is useful to 'unit test' specific moves, and also serves as a connection to the original stepwise enumeration. In particular, these moves are equivalent to the basic moves in the original stepwise assembly executables (swa_rna_main and swa_protein_main), but can have stochastic sampling of nucleotide/amino-acid conformations to minimize. Furthermore, use of the -enumerate flag recovers the original enumerative behavior. Example in tests/integration/tests/swm_rna_move_two_strands.

Conformational space annealing (CSA) is a new population-based optimization for stepwise monte carlo. When running stepwise with CSA, each job knows the name of a silent file with a "bank" of models and updates it after doing some monte carlo steps. Each model in the bank has a "cycles" column (and its name is S_N, where N = cycles). This is the total number of cycles in the CSA calculation over all jobs completed at the time the model is saved to disk. Currently, decisions to replace models with "nearby" models are based on RMSD. The RMSD cutoff can be set via the -csa_rmsd option.

The following parameters define the amount of computation performed by stepwise with CSA:

To run stepwise with CSA, create a README_SWM with the following command-line:

To setup the jobs on a cluster, run the following command:

NOTE: The csa_bank_size should match njobs, the number of cores running in parallel.

What do the scores mean?

The score terms are similar to those in the standard Rosetta energy functions for protein or RNA (which themselves may be unified soon). For completeness, some additional terms relevant for stepwise applications are described here.

The stepwise application is not guaranteed to finish construction of the entire full modeling problem in the number of cycles provided. We would like to obtain models that have all residues fully represented, as doing so satisfies two requirements:

We would like to fill in these models with 'unfolded' residues, and we do so using the application build_full_model. This application runs in two principal modes, each of which eexcutes the same top-level plan -- to place all the residues from the intended full modeling problem and compute a realistic RMSD, as well as base-pairing statistics to evaluate how much of the native structure's key features were recovered.

The application always takes a silent file through -in:file:silent and outputs one via -out:file:silent. In one mode, run with -virtualize_built true -caleb_legacy true, we install virtual residues one at a time with stepwise moves. This is very fast, perhaps seconds per structure. The second (-fragment_assembly_mode true) installs all residues at once, as 'repulsive-only' variants (that experience only van der Waals repulsion and chain-closure penalties) and then uses the fragment assembly code to optimize its conformation. This method takes considerably more time and isn't deterministic but does have the advantage of producing conformations of self-avoiding chains. (In theory, the virtual residues installed by the first mode could self-intersect.) A standard command line used in the Watkins, 2018 paper is:

Subsequently, we can take resulting models and run them through a clusterer to analyze how well the run converged on low-RMSD solutions.

Extraction Of Models Into PDB Format

The models from the above run are stored in compressed format in files like swm_rebuild.out You can see the models in PDB format with the conversion command.

In this mode, created by the flags -lores seeks to enable tests of stepwise with way more cycles than allowed above. Instead of minimizing, the model is optimized by 100 cycles of fragment assembly after each stepwise add/delete/resample, in a low resolution scorefunction (here, rna_lores.wts supplemented with loop_close and ref). Leads to over-optimization of an inaccurate function in most loop modeling or motif cases, or worse optimization than classic FARFAR setup for loops. Contact Rhiju if you're interested in trying on more complex cases, where there might be a 'win'.

This is a generalization of stepwise design where loops (specified as strings of n in the FASTA file) are allowed to change their length during the run. Maximum loop lengths are based on FASTA file. Run stepwise with -vary_loop_length_frequency 0.2 to check it out -- contact Rhiju to make this robust, and to optimize predicted delta-G for tertiary folding by comparison to free energies from the Vienna RNA package.