This code allows build-up of three-dimensional de novo models of RNAs of sizes up to ~300 nts, given secondary structure and experimental constraints. It can be carried out reasonably automatically, but human curation of submodels along the build-up path may improve accuracy. A fully automated pipeline is in preparation (a previous iteration of this is described in rna assembly documentation).

Here's a movie of models created through iterative application of this modeling workflow on the lariat-capping GIR1 ribozyme, as part of a blind prediction trials (RNA puzzle 5): 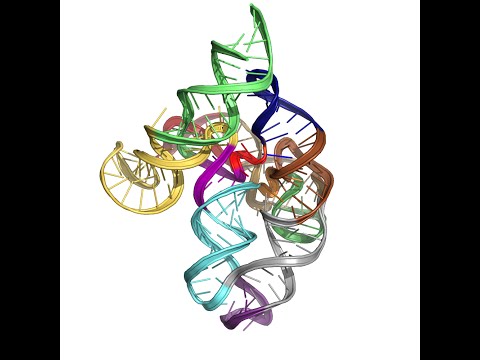 This documentation page emphasizes the setup of multiple jobs that together permit the modeling of complex RNA folds. Each of the 'sub-jobs' is either a helix creation, a RNA comparative modeling job rna_thread, or a run with the FARFAR (fragment assembly of RNA with full-atom refinement) de novo modeling application. If desired, sub-models can be grafted together into bigger pieces.

The input files, algorithm, etc. for the FARFAR application are described separately here, but a detailed understanding of those file formats is not necessary for modeling.

The main wrapper code is available through installation of RNA tools.

The RNA puzzles have offered useful testbeds of helix modeling, motif homology modeling, de novo modeling, and grafting to larger RNA structures. Examples of all four steps are available in:

Examples of blind predictions carried out with this pipeline, including the one in the movie above, are in:

Some recent manuscripts that describe this workflow in detail are:

Following are examples for a sequence drawn from RNA puzzle 11, a long hairpin with several submotifs. The fasta file RNAPZ11.fasta looked like this:

and the secondary structure file RNAPZ11.secstruct for the whole problem looked like this:

Helices act as connectors between motifs. It can be useful to pre-build these and keep them fixed during each motif run, as grafting (Step 4 below) requires superimposition between shared pieces of separately built motifs.

A sample command line is the following:

This application output the helix with chains A and B, but removing the chains prevents some confusion with later steps, so you can run:

To setup the above python scripts, follow the directions for setting up RNA tools. Example files and output are in:

Step 2. Use threading to build sub-pieces

In the problem above, there is a piece which is a well-recognized motif, the UUCG apical loop.

Let's model it by threading from an exemplar of the motif from the crystallographic database. There is one here:

Slice out the motif of interest:

Thread it into our actual sequence:

Let's get the numbering to match our actual test case:

Example files and output are in:

To build motifs or several motifs together, we will use de novo Rosetta modeling. In this example, we'll model the motifs between H2 and H4, using our starting H2 and H4 helices as fixed boundary conditions. Note that a more advanced method, stepwise modeling is also available for high resolution modeling (and is actually easier to run the fragment assembly), but remains mostly untested in the context of buildup of large RNA complex folds; for motifs that have any kind of homology to existing junctions/motifs, FARFAR should be better & faster.

Fragment assembly of RNA with full atom refinement (FARFAR) has been equipped to map numbers from our full modeling problem into subproblems, as defined by the -working_res flag"

You don't need to supply a native if you don't have it -- just useful to compute RMSDs as a reference.

[Historical note: there is also a script rna_denovo_setup.py which was used to set up input files for rna_denovo before it could handle residue mapping. You may see it called in older Rosetta RNA modeling workflows.]

Example output after a couple of structures goes to H2H3H4_run1b_openH3_SOLUTION1.out.

For convergent results, you may have to do a full cluster run -- some tools are available for condor, qsub, slurm queueing systems as part of rna tools.

Inspect in Pymol, using, e.g., the commands available in RiboVis. (For an automated workflow, you can also cluster these runs and just carry forward the top 5 clusters.) Demo files are available in: demos/public/rna_puzzle/step3_farfar/

Some useful options for rna_denovo_setup.py

Step 4. Build-up larger pieces by grafting or by more FARFAR

Once you have several models of sub pieces, they can be combined in two ways.

One option is to run further FARFAR jobs (rerun Step 3), but supplying solutions to sub-pdbs via -s <pdb1> <pdb2> ... into larger modeling jobs. This is particularly powerful if a set of jobs can be set up in which each new job builds an additional peripheral element or junction into a well-converged model of a sub-set modeled in a previous job – a stepwise buildup, analogous to what is being explored in high-resolution stepwise modeling.

Alternatively, you can quickly graft two PDBs based on superimposition of shared residues, either using the align command in Pymol, or with the following Rosetta command lines:

Demo files are available in: demos/public/rna_puzzle/step4_graft/