Rosetta is a massive, integrated toolset made of many software modules that together form an expressive programming language for modeling biomolecules. Rosetta has been used to achieve many key “firsts” in protein modeling and design, including the first accurate solutions to the de novo structure prediction problem and the first novel protein fold designed by humans, and it continues to break new ground every year. 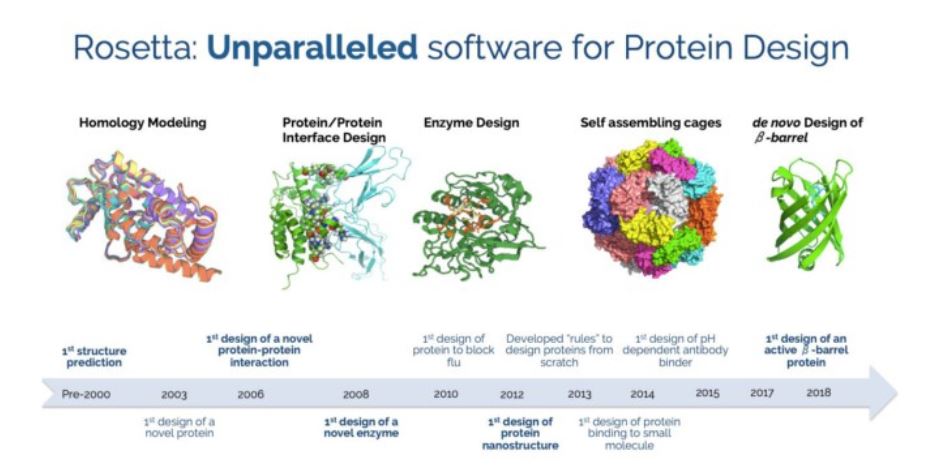 Rosetta has already led to the creation of new drug candidates and products, and its application in this space is only accelerating. There is concomitant growth in the number of companies licensing Rosetta and the demand for scientists skilled in its use. Many examples of molecules discovered with help from Rosetta are described in the literature or public media, and at public presentations by companies like PvP Biologics, Genentech, and Pfizer. There are likely many more Rosetta-designed molecules currently in development at biopharma firms than have been publicly disclosed. Given the seemingly limitless functional capabilities of proteins, it is likely that in the future Rosetta-designed molecules will be useful and valuable in fields beyond medicine. It is important for Rosetta Developers to understand how the code they write is being managed and licensed, and the benefits that this brings to the Rosetta community as a whole.

The Rosetta software package has been collaboratively developed over the years by hundreds of contributors from dozens of Universities and other organizations, unified under a single structure: the Rosetta Commons. The Rosetta Commons is both a legal and organizational structure that ensures that we can all work together to contribute to and benefit from Rosetta. One of the main reasons Rosetta has become best-in-class in numerous applications is that the Rosetta Commons structure encourages openness, collaboration, and collective extension of the core code base in many different scientific directions. Most other tools in protein modeling are much more specialized and fragmented, resulting in limited flexibility, slower innovation, and difficulty attracting and inspiring new innovators.

No. The Rosetta source code is made freely available for academic and not-for-profit research, but commercial entities must pay an annual licensing fee for access. There are two main reasons the Rosetta community manages the Rosetta source code in this way. First, this model brings valuable revenue to the community that is reinvested to support further scientific and technical development of Rosetta. Second, this model facilitates community cohesion through a social contract of sorts: members of the community enjoy concrete benefits, but they also have an obligation to be productive and contributing members of the community rather than acting entirely in their own self-interest. If Rosetta were made entirely open source, this community cohesion would partially or entirely dissipate, and Rosetta development would become more fragmented and lose potency.

What is the Rosetta Commons?

The Rosetta Commons organizes Rosetta and the people working on it, along with the intellectual propertyembodied in the software itself. Formally, it is a legal agreement between a member institution and theUniversity of Washington (UW) to non-exclusively license copyright of the voluntarily submitted Rosetta source code to UW, which in turn has agreed to manage the licensing efforts and associated revenue from Rosetta forthe benefit of the participating laboratories and groups. The Rosetta Commons is composed of >70 academicand industry organizations.

How does the Rosetta Commons maintain control and management over Rosetta?

Following the lead of many open source projects that combine GitHub and a clear licensing model, the RosettaCommons maintains control over the source code while promoting and expanding the Rosetta Community, allwhile ensuring that IP is protected appropriately. Several mechanisms are used to maintain the integrity of the Rosetta code base and manage access to it. GitHub has fine-grained access controls which only allow validand current license holders read access to the source code. New features are developed in branches only by members of the Rosetta Commons or Corporate Developers who are granted write access. These access controls ensure that the branches maintained by the Rosetta Commons are only modified by authorized individuals. Proposed contributions are reviewed by the Rosetta Commons members, and only authorized Rosetta Commons users can approve their merger into the Rosetta code base. Specifically, when a developer completes work on a branch, they submit these changes for approval via a “pull request.” The proposed contribution is then reviewed by a Rosetta Commons member who: 1) accepts the contribution, 2) provides feedback and requests changes to the contribution, or 3) decides that the contribution is not in line with the direction of the Rosetta Commons and rejects it (this almost never happens for reasons other than code duplication or serious and unresolvable quality concerns). This rigorous and standard open source process ensures the Rosetta Commons has appropriate oversight regarding vision, direction, management, and quality of the software. Furthermore, developing new features on branches that require review and approval before merging ensures that changes to the source code will not appear in the officially managed and released version of Rosetta until they are ready for official release.

What is the current Rosetta licensing model?

The Rosetta Commons approach to licensing Rosetta is based on two premises. First, making the software freely available to not-for-profit users encourages wider usage and adoption of Rosetta, amplifying its role inthe march of science. Second, if for-profit entities use Rosetta in their commercial endeavors, some financial benefit (in the form of a software licensing fee) should flow back to and be reinvested in the Rosettacommunity. UW exclusively manages Rosetta licensing on behalf of the Rosetta Commons. Licenses arefree-of-charge for academic/non-profit/government entities, while commercial entities pay a licensing fee on anannual basis. This arrangement accomplishes the goals of the Rosetta Commons by ensuring that access to Rosetta is freely available for academic research purposes while also providing ongoing financial support forthe project. This funding benefits the community as a whole by supporting, for example, RosettaCon and other conferences and workshops, key developers that play an important community-focused role by maintaining and improving the quality of the code base, and community-oriented research projects in Rosetta Commonsmember labs.

How does the Rosetta license affect me as a developer? As an entrepreneur?

It should be noted that you do not sign over your rights to patentable products (e.g., novel and useful proteins) generated with the help of Rosetta. There are numerous examples of people using Rosetta to generate new IP that resulted in patents and/or served as the basis for forming new companies.

In addition to getting a Rosetta license, what are the other benefits of being part of the Rosetta Commons?

Due to the organizational structure of the Rosetta Commons and the reinvestment of licensing revenue in the community, Rosetta Commons members are well-positioned to rapidly try new ideas, add new innovations, and form fruitful collaborations. Benefits include:

What are the benefits of the Rosetta Commons enabling contributions from a wider community?

Much like Linux, Git, or other collaboratively-developed open source projects, Rosetta has become a powerful, widely-adopted tool because it enables us to mutually benefit from each other’s work and coordinate our efforts to solve big problems. Expanding the pool of Rosetta contributors has led to the development of a rich ecosystem, accelerated innovation, and created a vibrant community of researchers. As people continue to build upon Rosetta, they become more invested in its overall success. As more people build upon Rosetta, the number of use cases for Rosetta will expand, resulting in Rosetta having a more mature and higher quality code base.

Today, the Rosetta community is the dominant molecular design community. This is creating demand for Rosetta-skilled modelers at many companies, and the success of Rosetta-focused companies like Cyrus and Arzeda is spreading awareness of that type of skill set. As we continue to develop the tool, Rosetta and our collective skillsets become ever more valuable over time: the rising tide lifts all boats.

You can learn more about the larger topic of open source structures here.

How is Rosetta distributed and how is the license verified?

Rosetta is currently distributed to licensees as an archive of the complete source code for each release. Access to the archive is restricted by a username and password provided to the licensee by UW. There are no runtime authentication mechanisms in place, which serves to facilitate modifying and running Rosetta in any environment.

What types of commercial licenses does the Rosetta Commons offer?

Commercial Research License: Allows the licensee to use the software for research purposes and/or to develop derivative products. It explicitly forbids the repackaging, redistribution, or relicensing of the product in any way. Numerous large pharma companies have Commercial Research Licenses to Rosetta. It should be noted that the IP associated with products derived from use of Rosetta (e.g., molecules of therapeutic value) belongs to the entity that creates these products; the Rosetta Commons has no reach-through into such IP.

Company Contributor License Agreement: This agreement allows specific, named employees of an organization with a Commercial Research License to contribute software changes to the Rosetta code base. The agreement is based on the widely used Apache Corporate CLA and is available from UW CoMotion upon request. Industry developers have the same obligations as all other Rosetta Commons members (e.g., non-exclusive license of the copyright of their contributions to the Rosetta Commons), except that they do not have access to direct financial support from the Rosetta Commons and may not serve on the Rosetta Commons Board of Directors. This model accomplishes several goals of the Rosetta Commons. First, it widens the pool of Rosetta users and contributors by retaining highly skilled Rosetta developers who have gone on to careers in industry as valuable members of the broader Rosetta community. Second, it increases the diversity of scientific problems to which Rosetta is being applied, as industry researchers often have different scientific goals than academic researchers.

Cyrus-Rosetta License: Cyrus is a private company that offers an easy-to-use, cloud-based version of Rosetta to customers with active Rosetta licenses from UW (either commercial or academic/non-profit). Cyrus has a symbiotic relationship with the Rosetta Commons that includes the latter’s partial ownership of Cyrus, royalties paid to UW for the benefit of the Rosetta Commons, large amounts of code committed to the Rosetta code base on a regular basis, and increased licensing revenue for the Rosetta community since Cyrus recruits new Rosetta customers on a regular basis and helps convince existing customers to reactivate their licenses. Like organizations that have signed the Company Contributor License Agreement (see above), Cyrus has access to Rosetta’s GitHub repository.

What is the relationship between Rosetta Design Group and the Rosetta Commons?

What if I want to start my own company based on tools or capabilities in Rosetta?

Currently, any company can license Rosetta for use on an annual basis (with certain restrictions; e.g., for companies in countries with restricted trade with the US such as North Korea). Licensees are permitted to use Rosetta for internal work, or to provide services that rely on Rosetta to other organizations. However, serving software that uses Rosetta or makes Rosetta accessible to third parties is not permitted and should be discussed with the UW licensing office and the Rosetta Commons Board.

What if I want to use Rosetta at a company that hires me in the future?

Any company can license Rosetta for use on an annual basis (with certain restrictions; e.g., for companies in countries with restricted trade with the US such as North Korea). Licensees are permitted to use Rosetta for their internal work. Many large pharmaceutical companies already license Rosetta, and a rapidly growing set of smaller biopharma, chemical and consumer products firms are Rosetta licensees. If you take a job at a company that does not have a Commercial Research License and you would like to obtain one, please contact UW CoMotion.